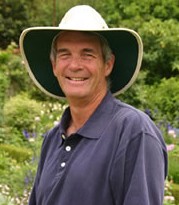 The Horticulture Garden, established by Dr. Armitage in 1982, has become a mecca for visitors wishing to see the newest in annual and perennial plants.

The garden is supported by plant breeding companies throughout the world, and his evaluations of herbaceous taxa for the Southeastern climate is followed closely by the floriculture industry. The garden not only is a research facility but also has been a powerful teaching tool for the last IO years. It is a training ground for horticulture, providing incomparable experience for students embarking on their careers in horticulture.

The garden is also special in that it is one of only 30 All-American Trial Gardens in North America, and, as an All- American judge, Dr. Armitage's opinion of the plants affects their potential to become national best sellers.

As a teacher and lecturer, Dr. Armitage engages his students in real world experiences. He was recognized as one of the best teachers in the nation when he received the distinguished National Educator Award from the American Horticultural Society and The Medal of Honor, the highest award possible from the Garden Club of America. He has received the Educator of the Year from the Georgia Green Industry Association, The Horticulture Initiative Award from the Southeast Greenhouse Association and the Gold Medal of Achievement from the Massachusetts Horticultural Society.

He is in constant demand as a lecturer, having spoken in nearly all the states as well as Canada, New Zealand, Australia, Columbia, Holland, Germany and Greece.

Dr. Armitage's well-known classroom and reference text, Herbaceous Garden Perennials, A Treatise of Identification, Culture and Garden Attributes, now in its second edition, was designated one of the 75 most important horticultural books written in the last 75 years by the American Horticultural Society.

His book Specialty Cut Flowers was awarded the prestigious Educational Media Award from the Professional Plant Growers Association in 1994.

Allan, Armitage on Perennials, a guide- book to perennials, won the Garden Communications Award from the Garden Writers Association of America. He has authored four additional books and written more than 250 articles and papers.

His recent works include the completion of two CD-ROMs for plant professionals and gardeners.

The second is an interactive CD-ROM titled The Educated Gardener, which allows gardeners, designers and students to rapidly search by flower color, height, climatic zone and sun/shade tolerance for thousands of perennials, including associated text and photographs. This CD-ROM was completed in December 1998 and received the Green Thumb Award from the Mail Order Gardening Association in 1999.

Dr. Armitage has been instrumental in establishing the University of Georgia Horticulture Department as one of the top teaching and research programs in the United States. His commitment to the introduction of new plants has translated to significant profits for growers. As a tribute to his contributions, the Department of Horticulture at the University of Georgia is establishing the Allan M. Armitage Endowed Professorship for Herbaceous Plant Instruction and Introduction. To establish an endowed professorship, a minimum of $250,000 must be raised. The endowment will perpetuate Dr. Armitage's work and influence the horticulture industry in America.

Help Continue a Legacy of Excellence
Alumni giving back is one of the primary ways CAES can continue its mission. Consider giving today.
Donate Now